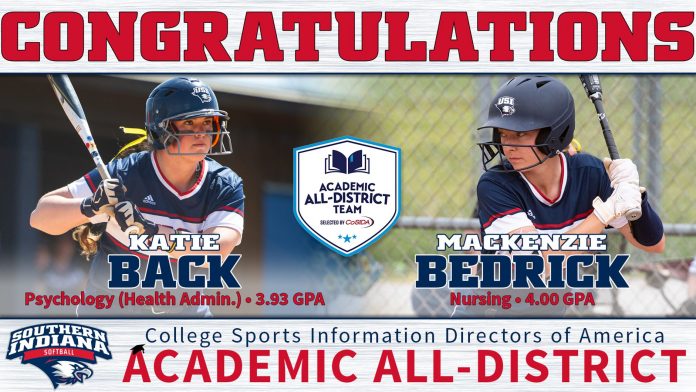 Back, a second-team All-GLVC honoree, entered the NCAA II Midwest Region #1 Tournament with a team-leading .389 batting average to go along with nine doubles, two home runs and 28 RBI. In the classroom, Back recently graduated with a degree in psychology and a minor in health administration. She had a 3.93 grade point average heading into the spring semester.

Bedrick, an honorable mention All-American a year ago, was named second-team All-GLVC and NFCA All-Midwest Region after hitting .367 with three doubles, two triples, 16 RBI and 17 stolen bases. The nursing major has a perfect 4.00 GPA in the classroom.

Both Bedrick and Back advance to the national ballot for Academic All-America consideration.

USI is currently taking on Saginaw Valley State University in the opening round of the NCAA II Midwest Region #1 Tournament at the USI Softball Field.