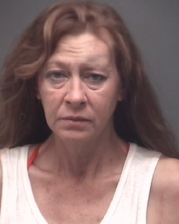 Warrick County – Late last night at approximately 11:25, Indiana State Police received information that a 2008 Chevrolet Cobalt was traveling westbound in the eastbound lanes of I-64 from the 40 mile-marker, which is east of Lynnville. Troopers Boeckman and Hurley immediately responded to the area to locate the vehicle. At approximately 11:30, Trooper Hurley had his emergency lights and siren activated on his patrol car near the 35 mile-marker, but the driver refused to stop and continued westbound in the eastbound lanes. Approximately one minute later, Trooper Boeckman drove his fully marked patrol car into the eastbound lanes near the 33 mile-marker to warn eastbound motorists and to attempt to stop the wrong way driver. Moments later, the wrong way driver failed to stop and struck Trooper Boeckman’s patrol car. The driver was identified as Angela Ayer, 52, of Dale. Ayer had a blood alcohol content of .23%. She refused medical treatment and was taken to the Warrick County Jail where she is currently being held on bond. Trooper Boeckman was not injured. No other vehicles were involved in this incident.