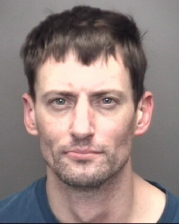 Vanderburgh County – Yesterday afternoon at approximately 2:50, Trooper Ross Rafferty stopped a vehicle on Fares Avenue near Delaware Street for expired registration. The driver was identified as Neil Summers, 37, of Newburgh. A passenger was identified as Kelli Rogers, 36, of Evansville. During the traffic stop, Summers exhibited signs of impairment. Senior Trooper Finney and his K-9, Boomer, arrived to assist. While walking around the vehicle the K-9 alerted to the presence of narcotics. A search of the vehicle revealed heroin, a syringe, drug paraphernalia and Xanax. Summers failed field sobriety tests and submitted to a chemical test at a local hospital. The test results are pending. Summers was arrested and taken to the Vanderburgh County Jail where he is currently being held without bond. Rogers was arrested for an outstanding failure to appear misdemeanor warrant and taken to the Vanderburgh County Jail.