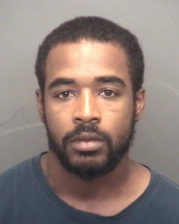 Vanderburgh County – Last night at approximately 11:15, Trooper Tyler Widner was patrolling US 41 near Riverside Drive when he observed a vehicle traveling all over the roadway north on US 41. The driver of the vehicle turned east onto Riverside Drive and then south on Sunburst Boulevard without using a turn signal. Trooper Widner initiated a traffic stop and the driver stopped on Sunburst Boulevard. When Widner started to approach the vehicle the driver drove away and then pulled into the Woodland Park Apartment Complex and stopped. Widner exited his patrol again and ordered the driver out of the vehicle. The driver exited his vehicle, showed his hands and began to walk toward the apartments. Widner ordered the male to stop, but he continued to walk toward the apartments. The subject was then tased, but it was ineffective. The driver was able to gain access into an apartment building, but Widner tackled the subject and was able to take the subject into custody with assistance from Evansville Police.

The driver was identified as David Johnson, 30, of Evansville. Further investigation revealed Johnson is a Habitual Traffic Violator for Life and was under the influence of alcohol. He was taken to the Vanderburgh County Jail, but he refused to submit to a chemical test. Johnson is currently being held without bond.